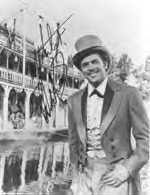 Belva Davis and John Carter Brown will be this year’s recipients of SAG-AFTRA’s Howard Keel Award, which is presented in recognition of their significant contributions to the 160,000-member union.

Davis was the first African-American woman hired as a television reporter at San Francisco’s KPIX-TV 5 in 1966. She served on the board of AFTRA’s San Francisco local, was elected board president in 1978 and served as an AFTRA vice president. She continued to serve as a national leader of the union from the 1980s through the merger with SAG in 2012. She also served as AFTRA’s national EEO Committee chair for more than 12 years and was instrumental in creating the union’s American Scene Awards, which are bestowed on productions that represent a realistic portrayal of American diversity.
–

“I want to congratulate my colleagues Belva Davis and John Carter Brown on their well-deserved recognition,” said SAG-AFTRA president Gabrielle Carteris. “Both John and Belva have worked tirelessly for decades with SAG-AFTRA and its predecessor unions to elevate the voices and needs of their fellow members. They truly embody the spirit of the Howard Keel Award.”

The award, named after SAG’s 10th president, is the highest honor given by the SAG-AFTRA Committee of Locals, and will be presented October 22 at its meeting in Los Angeles.

“This year’s winners of the Howard Keel Award embrace the true meaning of union leadership and sacrifice,” said Nancy Duerr, chair of the Howard Keel Award Committee. “Both Belva Davis and John Carter Brown have blazed trails with their craft, passion and service to members of legacy SAG, AFTRA and now SAG-AFTRA. I am proud to recognize their gifts and leadership with this prestigious honor alongside my brothers and sisters representing the Committee of Locals.”

Great!  Let’s just hope that there’s no Showboating during the award ceremony!