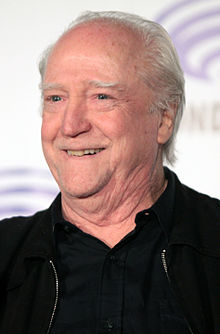 Wilson, who was perhaps most recognizable around the globe for his iconic role as Hershel Greene on The Walking Dead, served on the national and Hollywood Division boards of Screen Actors Guild. He was passionate about the issues facing actors and generously gave his time and expertise in service to the membership and all actors.

Screen Actors Guild presented Wilson with the Ralph Morgan Award in 2007, an honor given for distinguished service.

“Scott was an extraordinary actor and a dedicated union activist whose efforts during the union’s Global Rule One campaign helped secure important provisions for actors working internationally on union contracts. His performance as Hershel on The Walking Dead was an emotional core of that show, ” said SAG-AFTRA President Gabrielle Carteris. “Scott’s career embodies the inscription on his Ralph Morgan Award: ‘devotion to the cause of actors, courage to fight for the right, and sacrifice of self for others.’ Our hearts go out to his wife, family and friends.”

In addition to his work on The Walking Dead, Wilson’s credits include In the Heat of the Night, In Cold Blood, The Great Gatsby, The Right Stuff, G.I. Jane and Monster. He also appeared in numerous episodes of CSI: Crime Scene Investigation in the recurring role of Sam Braun, a crooked Las Vegas casino owner and father of Marg Helgenberger’s Catherine Willows.
—

The Top SAG Actor on-line discussion board has shut down for a week!!!!  When you try to access the board www.sagactor.com  you get the following  message:

“Everyone needs to take a TIME OUT to think about how you are behaving in this forum. I will re-open the site on Friday, July 20th”

And that’s pretty much it in a nutshell.  Hopefully, when the website goes up again, those on line will use it for discussing important SAG/AFTRA issues rather than petty personal attacks.

PS:  I have used this site to express my admiration for SAG heroes like Scott Wilson, Kent McCord, Tom Bower and others.  We’ll I’d like to add to that list, Brian Hamilton, the creator of the SAG Actor discussion board!  For years, he has made it available for the benefit of actors  mostly on his own dime and time!

The Voting Rights Act of 1965, signed into law by President Lyndon Baines Johnson, ensured that every citizen would be able to exercise his/her constitutional right to a vote. The Act has been extended 3 times, most recently in 2006 by President George W. Bush. Now that right is under attack yet again in states such as Wisconsin, Ohio, Arizona, Texas, Georgia and others, and it seems that the Screen Actors Guild has joined the assault by denying to members their right to vote on a matter of major importance to the life and livelihood of our membership.

Our right to residuals has been summarily waived by a Standing Committee of the Screen Actors Guild on the recommendation of staff. This waiver applies to residuals paid by the cable station, TV Land, a subsidiary of Viacom. We are told by staff that it only applies to productions with a budget so small that there are currently no productions that would qualify.

What is wrong with this picture? Why would TV Land, a subsidiary of Viacom, with access to a raft of highly paid attorneys, be asking for a waiver of currently non-existent residuals? Any member with an ounce of common sense can see where this is leading. There will be more waivers. It is no minor matter.

This waiver has breached an important principle. It is no minor matter. Residual income is of primary importance in the lives of performers. It must never be waived.

If staff and a majority of this Standing Committee’s members can, against the vigorous objections of the minority, secure a waiver of these non-existent residuals, then more will follow and they will be real residuals, lost to real people.

Our Screen Actors Guild constitution protects the right of our members to vote in a referendum on collective bargaining agreements (Article XI, section 1) and on rules and regulations governing our relations with “persons, firms or corporations connected with the motion picture industry” (Article XVI). Amendments “of a minor nature” can be approved without referendum but only “by a vote of the majority of the Board of Directors voting thereon”. This amendment is not minor and it was not voted on by the Board of Directors. This waiver contravenes the provisions of our constitution. Any waiver of residuals is a waiver of an important principle and requires a referendum of the membership.

Staff recommended this waiver to the Standing Committee. Staff will not suffer any loss of income or of contributions to their Pension and Health Plan from this waiver or any future waivers. I would like to ask Mr Duncan Crabtree-Ireland, who sits on the Board of Trustees, to explain why Staff continues to receive a 3.5% accrual rate in their pensions even after members have been reduced to 2.0%. Are we to expect this to continue after merger? What more advantages will be given to staff after merger while members benefits continue to diminish?

If merger is approved, the right to vote in a referendum now present under the SAG constitution will be significantly diminished. In a circuitous and subtle fashion, the constitution of SAG-AFTRA has altered the provisions requiring a referendum and/or a vote of the Board so that these requirements become very much weakened or lost altogether.

Protect your residuals and your Pension and Health benefits.
Vote NO to merger

God Bless You Scott Wilson and all our SAG Heros!!!!

Today at Screen Actors Guild on Wilshire Boulevard, Samantha Hartson and I were threatened WITH ARREST by the property manager John Carter, as well as Duncan Crabtree-Ireland and Pamela Greenwalt.We were handing out information about the petition for ONE UNION–SAG.
http://gopetition.com/petitions/sag-merger.html

Mr. Carter angrily marched up to me, nearly shouting that “You can’t be here doing this. You have to leave immediately”

I had been there four minutes at that point.

I said, “I have every right to be here doing this. I’m a Screen Actors Guild Member and this is a public access entryway”

I said “I’ve seen at least three dozen members of SAG standing in exactly this spot doing exactly the same thing I’m doing. I don’t have a picket sign in my hand. You can’t tell me to leave”

He said “You have to leave or you’ll be arrested”

The security guard was sent out then to further ‘advise’ us to leave, and I said that he should go in and tell that man that I am waiting to be arrested and that I will call Channel 4 and Dave McNary and it will be all over the news that SAG is arresting its own members, and that I hope they do come out to arrest me because a false arrest STARTS at 15,000 dollars in this state and I really could use the money because my union is under attack and my residuals have been dwindled down to nothing because of this and I rally need that money.

I held my hands out as if they were handcuffed and did the “time to get arrested dance” for him with each hand on my head then against the wall.

Then Scott Wilson showed up with LAPD Sergeant Kenneth Lu to explain to Carter and Crabtree and Greenwalt that its a Civil Rights violation to arrest us, and they would have to make a ‘citizen’s arrest’ because the LAPD would not take responsibility for a false arrest because we could sue the living piss out of them in Civil Court.

Then Scott Wilson said “You should arrest me first then”

We continued to pass out the petition flyers and Crabtree and Greenwalt slinked back in to the building.

We will be there again before the meeting tonight, passing out information about our Petition for our union.

Perhaps we’ll be arrested. Two reporters already called wanting to find out if there was a story to be had with union members being arrested for having an opinion.

I’ll make sure my hair looks decent for my mugshot and the subsequent press interviews. I’m looking forward to it because I don’t make any residuals under ALL THOSE AFTRA BASIC CABLE SHOW JOBS, so I can really use the cash for the discrimination lawsuit I’ll be filing.

Thursday, March 8, 2012,
1:00-3:00 pmScreen Actors Guild
5757 Wilshire Boulevard
Los Angeles, CA 90036The purpose of these rallies is to get the attention of the media. They can report on how this merger is flawed. They can help get our message out to the membership, why we must vote no.

If you care about the Screen Actors Guild… Show up! → Meet at 1:00 pm in front of the Guild, on Wilshire Boulevard…←Thank you,
Scott Pierce (Rally Organizer)

—-
Thank You and all the SAG Heroes that show up to SAVE SAG!!!!!
Arl
The Ol’ SAG Watchdog
VOTE NO√ ON MERGER!

SAVE SAG RALLY Today)
2012 (Round 3)
Thursday, February 23, 1:00-3:00 pm
Where: Screen Actors Guild 5757 Wilshire Boulevard Los Angeles, CA 90036
Validated parking for SAG /AFTRA members.
Come One, Come All! Please help get the word out! We must defeat this merger! Call, e-mail, and forward this flier on to other like-minded SAG members. We will gather in front of the Guild on Wilshire Boulevard….Expected attendees at Thursday’s rally include:
Alan Rosenberg, Frances Fisher, Kent McCord,
Scott Wilson, Tom Bower, Patti D’Arbanville,
Nichelle Nichols, and Warren Berlinger.
1 2