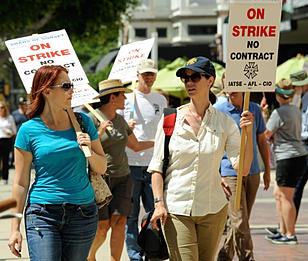 The mercury is already high, but on Monday we will be back on the picket line to turn up the heat some more!

Tomorrow, Local 700 members and our IATSE brethren will be back out in the L.A. sunshine to support the Shahs of Sunset crew on strike. In addition to our ongoing IATSE support, SAG-AFTRA has now issued a call to its L.A. activists to join us on the picket line. Union members throughout the entertainment industry are standing together to deliver a simple message: No contract, no Shahs.

On September 9, the IATSE sent a letter to Berne Productions, the Ryan Seacrest Productions subsidiary employing the crew of the unscripted Bravo series Shahs of Sunset, alerting the company that the crew sought union representation and an IATSE contract. When the company failed to respond, crew members walked off the job, disrupting production and post-production on the show’s fourth season. Despite an initial statement from Ryan Seacrest Productions that the company had “every intention of engaging in a discussion as soon as possible,” the employer has yet to respond to the crew’s demand for negotiations.

As the fight continues, we need to keep the pressure on the employer to come to the table. Please join the scores of folks — Local 700 members, members of other IATSE locals, and allies — who have already hefted picket signs in support of the Shahs strikers. Come walk tomorrow’s line to show you stand behind the courageous sisters and brothers taking a bold stand to improve their jobs and standards in our industry!

There is some street parking, but also paid parking lots nearby.

Please write to OrganizingLA@editorsguild.com to let us know when you expect to be able to join us.

Stay Cool!  While keeping the heat on these guys!