2ND UPDATE, 12:01 AM: The midnight deadline for the WGA contract talks has come and gone, and still no word on whether a deal has been reached or whether a strike will be called. The two sides are still talking, though, and that’s a good sign. The guild and the Alliance of Motion Picture and Television Producers are still at the table at AMPTP’s offices in Sherman Oaks. We’ll update you when there’s news.

The WGA continues to gather outside support as negotiations for a new film and TV contract come down to the wire, with LA City Councilman David Ryu, Sens. Elizabeth Warren and Sherrod Brown and the Allied Pilots Association announcing today that they stand in solidarity with the guild and its objectives. Negotiations, meanwhile, are continuing right up until tonight’s midnight bargaining deadline.

“It is in your power to avoid a work stoppage that will inconvenience millions of Americans and inflict serious economic damage,” Ryu wrote in a letter to CBS, Time Warner, the Walt Disney Company, 21st Century Fox, Comcast and Viacom. “We call on you to negotiate a new contract that fairly compensates the creators of your most valuable assets – the writers.” 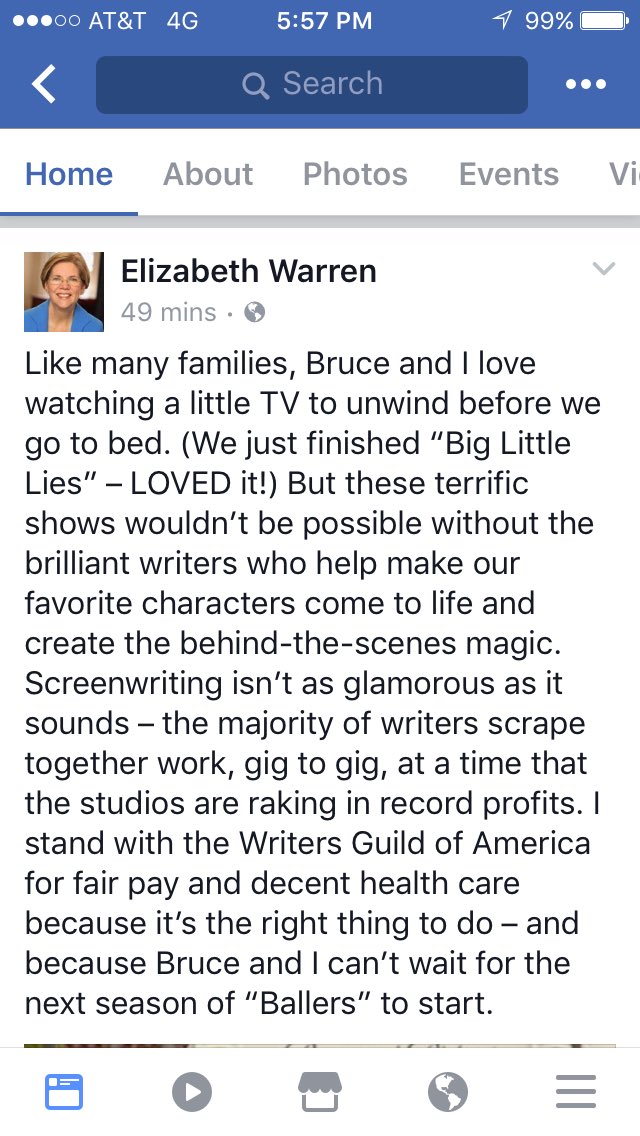 Hopefully!  We keep our fingers crossed.  And I ain’t saying this just to justify my pour spelling.

Recently  I received the following email regarding a story on an incident regarding 20th Century Fox and a SAG-AFTRA  extra:

“Sag watchdog and Sag&Aftra (Terri Becherer) both stood up for me. Thanks for all your hard work!”
Update!

Fox studio’s called and fully exonerated me with the Guild and Central.
They confirmed that I did nothing wrong–and my name has been cleared!

Thanks to all of you who spoke up on my behalf!”

Look there are two heroes in this unfortunate incident!  First, the extra who didn’t just accept the 20th bullying.  And secondly one great SAG/AFTRA employee Terri Becherer who went the extra mile on this one!!!

Ken you really need to talk to 20th!

Ah, so Mr. Howard  what do you need to talk to Mr. McCann about?  Well in general how about the rash of complaints to our guild concerning  the mistreatment of our background folks at Fox.  And more specifically the incident that took place last Friday in which a SAG-AFTRA extra was denied access to the Fox lot to work a show because that extra allegedly spoke back (abusively) to a security guard.

Well, to be fair Mr. president, perhaps it’s not as bad as it seems.  After all, if it were,  why were  20th security guards seen giggling in the background as  one of our SAG-AFTRA members was being ‘escorted, off the lot.  By the way, the escorting was being done past fellow SAG-AFTRA background actors waiting to enter the lot!  (You think there was a subtle message there?}

Oh, and Mr. President if you’re not sure all this happened the way I’ve reported, might I suggest you request to Mr. McCann that he turn over to you the film. that he claimed (at the time) recorded the entire incident!  Oh, again, and you might want to do that as soon as possible.  We wouldn’t want that tape to accidentally get erased, would we?

So what do you think?  Do you think Ken will even bother to check into this?  Whatever, you can rest assured the Ol’ Dog will not remain in the background on this one!  More to come!

inSA payroll glitch in 20th Century Fox’s residuals department inadvertently voided residuals checks worth about $93,000 that were sent out to about 200 actors, writers and directors. Fox is fixing the problem and will start issuing new checks next week. The problem began when the payroll department failed to take out federal withholding taxes on residuals checks issued in January and February. They tried to correct the mistake in early May, but a miscalculation led to another problem: the over-withholding of federal taxes. That resulted in roughly 200 residuals checks being sent out but marked “void,” obviously meaning they couldn’t be cashed. The problem mostly affected actors, but some writers and directors got also got voided checks. Fox will be issuing refunds to everyone who was over-withheld by more than $10. “We regret the administrative error and any inconvenience it has caused,” a Fox spokesman said. “We are doing our utmost to resolve the issue as quickly as possible.” Get Deadline news and alerts sent to your inbox

Hmmm…maybe they should become 21st Century Fox.  You Think?