Generations of L.A. youth have received his sports wisdom! 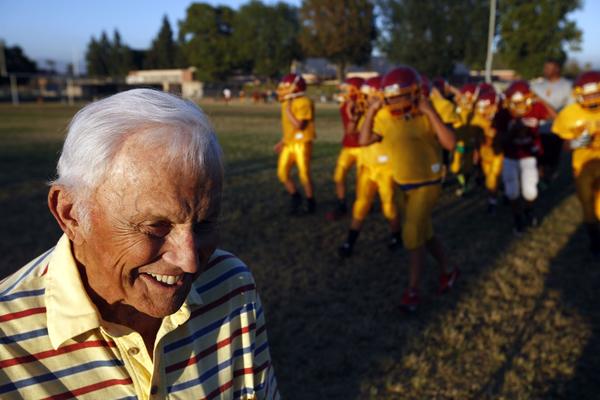 Retired actor Paul Napier — the first Mr. Goodwrench on TV — has been coaching high school and youth sports for decades. And he’s still at it.

To fully appreciate Paul Napier, you have to know that he played the original Mr. Goodwrench in the GM commercials, a natural fixer, good at keeping things running.

You’d also have to understand that the retired actor with the playful Dick Van Dyke voice has coached 77 seasons worth of youth sports — football, baseball, basketball — in Los Angeles, across 45 years, with such standouts as Erik Kramer and Charles White.
.
“I played him at guard,” Napier explains with a chuckle. “Back then, White was a guard.” Once, when Napier was out of town, one of his assistants cut DeSean Jackson, who could fly like a champagne cork and would go on to soar at California and now with the Philadelphia Eagles. Napier laughs about it now. He laughs about a lot of things that might otherwise do you in — overwrought parents, or the only thing worse, absentee moms and dads. He’s seen a lot in 77 seasons, and the eyes still crinkle at the memories. “Seventy-seven,” he says. “That was Red Grange’s number, you know.” No, actually, I didn’t. But then I’m not 83 years old and still coaching high school and youth sports four or five hours a day, oozing wisdom and keeping things running. For two years he was Mr. Goodwrench, part of a long career as an actor, much of it in commercials. Did a few pilots. Bit parts in “L.A. Law,” “Taxi” and, of course, “Coach.” Had a recurring role as a gardener on “Dynasty.” Once, late on Thanksgiving Eve, everybody tired and wanting to get out of there, Linda Evans kissed him on the forehead for getting a tricky scene right on the first take.

Good memories, yet also the sort of career enjoyed by every third stool at a coffee shop near you. It paid the bills. It put three kids through school. It kept the marriage going … 56 years and counting. Fifty-six. Like Lawrence Taylor. That one I know.

What really elevates Napier’s life, what makes him sports’ version of Mr. Holland in “Mr. Holland’s Opus,” are the thousands of young lives he’s affected across his decades of coaching.

Sure, one knee gave out already, and the other one is barking, but the competitive zeal and the fire are still there, the steely resolve. And maybe that most valuable tool in Mr. Goodwrench’s belt, composure.

“I try not to be from the yelling school, even though that’s innate with a lot of coaches,” he says. “I try not to criticize a young man in front of his teammates … only praise him.”

Over the years, the challenges have changed, even the kids. But it’s the kids who still make it all worthwhile, the differences you can make.

“We have a lot of kids whose family situation isn’t ideal,” he says of his 9- and 10-year-old players. “We have some kids who don’t have any father figures except for us.”

Then there are the parents who care too much.

“I think more people today see a youngster, if he has any talent at all, as their ticket out,” he says of pushy parents.

If it’s not one thing, it’s another. Yet Napier pushes on, working with the high school team at Campbell Hall from 4 to 6 p.m. each day, then racing over to Grant High, for the 6 to 8 p.m. Valley Youth Conference practices.

“The Patron Saint of Late Dinners,” his wife Marie calls him.

The patron saint of a lot of things.

What do you glean from 77 seasons? All sorts of old-school stuff, according to his son Scott, head coach at Campbell Hall.

That’s not to say he hasn’t mellowed in his older years.

“I don’t think [Vince] Lombardi would do as well these days,” he says of coaches who are too rigid.

Some day, there needs to be a place — sponsored by Nike, or Gatorade, or a consortium of pro leagues — where coaches like Napier can give workshops for other coaches, the young guys who have been at it only 10 or 20 years, relative newcomers, sharing wit and wisdom and a sensible approach to the often nonsensical world of youth sports.

Soon as that happens, it won’t be soon enough.

The great thing about Mr. Napier is that he knows when to play ball!  Admirably he plays ball with LA youth.  As a SAG member, even more admirably, he refuses to do so with those board members who are selling us out to our employers.  Way to go Paul!  Ah, I mean Coach!!!!