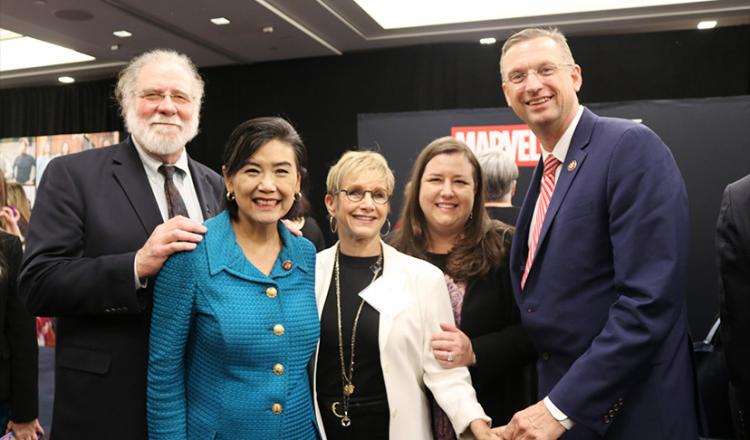 SAG-AFTRA President Gabrielle Carteris and Executive Vice President Rebecca Damon visited Washington, D.C., during the week of Nov. 11 in a successful effort to draw policymakers’ attention to the issues faced by working creative professionals and to discuss the continued economic benefits of the film and television industry across the United States.

“Connecting with legislators and industry partners is imperative as we confront the shifts that we’re experiencing in front of and behind the camera, and what they mean for the creative community as a whole,” said Carteris.

During their visit, Carteris and Damon, alongside leaders of Actors’ Equity Association, met with members of the House Ways and Means Committee to discuss and advocate for HR 3121, the Performing Artist Tax Parity Act of 2019, which seeks a long overdue update to the Qualified Performing Artists tax deduction by raising the income ceiling from $16,000 to $100,000 for those looking to take the deductions.

The highlight of the trip was the Beyond the Red Carpet: Movies & TV Magic expo on Nov. 14. Hosted by industry leaders in conjunction with House of Representatives Creative Rights Caucus Co-Chairs Judy Chu, D-California, and Doug Collins, R-Georgia, the event gives lawmakers a behind-the-scenes view into the film and television industry. Congressional members and staff networked with industry representatives and participated in live demonstrations, including a scene reenactment from The West Wing organized by SAG-AFTRA in collaboration with the Directors Guild of America.

The visit is a continuation of the union’s legislative efforts seeking to better protect the rights of performing artists. Other items on the legislative agenda include fighting the proliferation of “deepfakes,” realistic digital forgeries of videos or audio created with cutting-edge machine-learning techniques, and thanking those responsible for the Music Modernization Act. The MMA guarantees payments to singers and recording artists who recorded music made before Feb. 15, 1972 when their music is played on digital and satellite platforms.