A Closer look at the 2018 Network TV Code 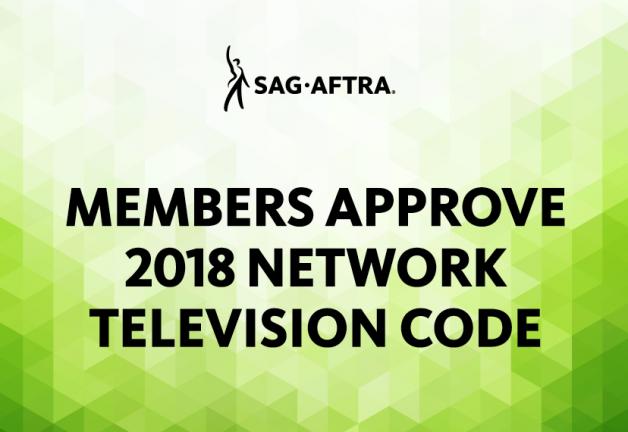 The ratification vote – via online voting and through requested paper ballots – follows the SAG-AFTRA National Board’s recommendation in July for members to vote yes on the new three-year contract with the four major television networks (ABC, CBS, NBC and Fox). Negotiations with the signatory producers began on May 30 in Sherman Oaks, California and concluded with a tentative agreement on June 9. Ballots were mailed to approximately 142,000 members. The contract term runs July 1, 2018, through June 30, 2021.

“I am gratified by our members’ vote of approval for this agreement. SAG-AFTRA members working in this area will benefit from stronger protections and meaningful increases in wages and residuals rates,” said SAG-AFTRA President Gabrielle Carteris, who served as chair of the Network Television Code Negotiating Committee. “Moreover, the agreement now reflects important new language limiting auditions or meetings in private hotel rooms and residences, which helps us make tangible changes in the way our industry is addressing sexual harassment.”

Added SAG-AFTRA National Executive Director David White, “This contract contains significant gains and protections for members working under the agreement. Dancers, singers, promo announcers, stand-ins, stunt coordinators and background actors will now receive stronger protections and increased wages that can be built upon in the future. I applaud President Carteris, our terrific member negotiating committee and our superb staff for securing these achievements in this negotiation.”

Highlights of the agreement include:

Increases in contract minimums over a three-year period, including an 8.7-percent overall wage increase to most program fees, implemented through increases of 2.5 percent the first year, 3 percent the second year and 3 percent the third year. The agreement also significantly improves funding of the AFTRA Retirement Fund.

Automatic increases in other categories are as follows:

A 4.1-percent overall wage increase for daytime serial performers, implemented through increases of 1 percent the first year, 1.5 percent the second year and 1.5 percent the third year.
A 4.6-percent overall wage increase for background actors employed on variety programs implemented through a 2-percent increase effective Dec. 31, 2018, and a 2.5-percent increase effective July 1, 2020.
First-year increase in contributions to the AFTRA Retirement Fund of 0.5 percent and the AFTRA Industry Cooperative Fund of 0.2 percent with the option to divert 0.5 percent of second and/or third year wage increases to the AFTRA Retirement Fund.

Recognition of Middle Eastern North African as a diverse category.
An improvement to our harassment-prevention language that explicitly prohibits harassment.
Improvements in the working hours language for minors. These changes do not impact the working hours for minors working in New York and California, but represent significant improvements for minors working in other states and enhance the union’s ability to enforce working hours in New York and California as well, by spelling out the requirements in a union contract rather than relying solely on state law.