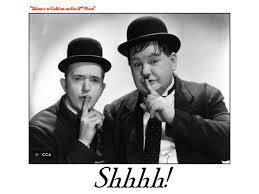 SAG-AFTRA and the networks have launched negotiations over successor agreements to the union’s Network Television Code master contract.

The union said Monday it has agreed with the networks to a news blackout until the negotiations are completed.

The union has not disclosed the details of its proposal, in keeping with the policy of saying as little as possible until deals are completed.

SAG-AFTRA members ratified a three-year successor deal covering work on movies and primetime TV in August. That agreement replaced the separate SAG and AFTRA contracts that were negotiated prior to the 2012 merger of the two performers unions.

SAG-AFTRA touted “significant gains” in the new tentative deal — including a compounded 8.7% hike in minimums over three years; unification of the SAG and AFTRA TV contracts; and improved terms and conditions and full TV rate minimums for productions made for SVOD services such as Netflix and Hulu Plus.

Perhaps this should be the SAG-AFTRA membership symbol.